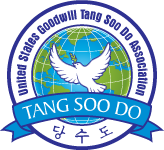 Train with Grandmasters and Masters from around the US (all ages and ranks) in two back-to-back clinics on Friday night. Choose from subjects including advanced tang soo do forms, walking cane form, self-defense, and gracie combative techniques.

Master Wesley Jenkins
These clinics is offered by Sa Bom Nim Wesley C. Jenkins of Tiger Do Jang. He will present Sa Do Jang Cho Dan (cane form) for Youdanja and Red Belt Gup members. Kodanja are invited to join him as he presents Ma Jin Hyung (Horse Working or Running Horse) as taught to him by Grandmaster Myung Seok Seo.

Master Garth Charland
This clinic is offered by Sa Bom Nim Garth Charland of Tang Soo Do Masters Alliance. He will address self-defense at close quarters against short bladed weapons and small firearms.

About the instructor: Master Charland was on a U.S. team in 1990, visiting Poland and Russia for friendship tournaments and demonstrations. He was frequent competitor and very successful on the tournament scene mainly in forms, fighting and breaking. Recalling his most memorable moments he cites the 1992 Green Mountain Challenge where he won the largest Middleweight division he had ever seen, then won the Grand Champion in fighting and then with the help of his teammates (Richard Hoyt and Fred Bushy), won the team fighting division against teams as far away as Russia.

He began his martial arts instruction career in 1988 teaching a karate program for the Watertown, CT Parks and Recreation which quickly grew to be the most popular program outside of Pop Warner Football. Currently Master Charland runs one of the largest karate training facilities in New England and was co-founder of the Tang Soo Do Masters Alliance.

Master Bill Odom
This clinic is offered by Sa Bom Nim William Odom of the Norfolk Karate Academy. He will address situations and present techniques for getting back to your feet after your opponent has knocked you to the ground. This clinic is intended to bridge between the ground and standing fights. Focus will be on defense and ground escapes found in Gracie Jiu-Jitsu.

About the instructor: Bill Odom began martial arts training in Thailand in 1968 at age 10. He earned is first black belt in Ji Do Kwan Tae Kwon Do before returning to the US. He began training Moo Duk Kwan Tang Soo Do under James K. Roberts, Sr. in 1970, was promoted to black belt in 1972, and has remained under Mr. Roberts since then. He supplemented his tang soo do training with other martial arts -- boxing, jeet kune do, sport taekwondo, judo, and jiu-jitsu -- during his 25-year military career. He retired from the Army in 2004 to open the Norfolk Karate Academy where he teaches tang soo do and Gracie Jiu-Jitsu. The school was the first Gracie Jiu-Jitsu Training Center certified by Rorion Gracie and is now in its seventh year of operation with over 200 students. 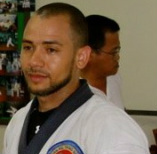 Master Jamal Pender
This clinic is offered by Sa Bom Nim Jamal Pender of Aqabah Karate. He will address self-defense and counters against some of the most common attack techniques used in physically aggressive situations including the headlock and rear choke.

About the Instructor: Jamal Pender began martial arts training at age six as a member of the Jackie Robinson YMCA in Harlem, NY under Kushinda Lamarr Thornton (Instructor of actor Wesley Snipes). Jamal received his first Black belt in Shotokan Karate at age ten under Mr. Thorton and began Tang Soo Do training with Kwan Jang Nim David Sgro while serving in the U.S. Navy in New London, CT. Jamal has been teaching Tang Soo Do under KJN Sgro since 1996 and has competed successfully in many local and international competitions. Jamal is the Master Instructor and Co-Founder of Aqabah Karate in College park, MD and expands his knowledge of Tang Soo Do by practicing and teaching Savate (French KickBoxing), Muy Thai, Brazilian Jiu Jitsu and the art of Budokon throughout the U.S. and Canada.

Master Donald Belsito Sr.
This clinic is being offered by Sa Bom Nim Donald Belsito Sr. of the Catskill Martial Arts Academy. He will present the Yang Family 24-posture form along with temple exercises and history. This clinic is designed to improve vascular circulation, gain flexibility and relax the mind. The concept of the Taiji (太極,"supreme ultimate") represents the fusion of Yin and Yang into a single Ultimate, depicted by the familiar Chinese symbol for the concept of yin and yang. The form was the result of an effort by the Chinese Sports Committee, which, in 1956, brought together four t'ai chi teachers to create a simplified form of t'ai chi as exercise for the masses. 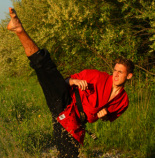 Instructor Cory Lutkus
This Clinic is offered by Kyo Sa Nim Cory Lutkus of the Tang Soo Do Masters Alliance. He will address Extreme Kicking and twisting focusing on jumping and spinning kicks as well as basic Martial Arts twisting techniques.

About the Instructor: Cory Lutkus started Martial Arts at the young age of 4 under Master Garth Charland. Cory has been in martial arts for 16 years and is currently a Sam Dan (3rd Degree) Black Belt in the art of Tang Soo Do. He has been heavily involved in the competition part of martial arts since he was very young. He started off competing in the local and New England circuits and in 2004 national karate team Team Straight Up picked him up. He competed on the NASKA circuit and traveled to countries such as Guatemala, Canada, and Mexico for International competition. While competing for Team Straight Up, Cory captured 13 World Championships in Weapons, Forms, and Sparring.  In 2009 Cory then joined the Amerikick World Competition Team under the coaching of Bob Leiker and Mark Russo. In 2009 he traveled to Spain for the WKA World Championships where he captured 6 World Championships. The same year he also obtained 2 more NASKA World Championships as well as an ISKA World Championship.

Cory attends Sacred Heart University and competes in Division 1 Track and Field. Cory still continues to teach at various karate schools around New England including his original school the Charland Institute of Karate and Fitness in Watertown, CT.