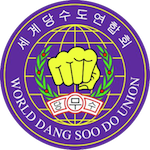 The WTSDU is headquartered at the historic SongTan Moo Duk Kwan Dojang in Songtan, Korea (now a part of Pyongtaek city).  The Songtan dojang was opened by Choeng Jae Nim in 1958 as is currently open today with head Master Kim, Yoon Ki.

A student of Chung Sok Kim (Dan #158), Grandmaster Kim began training in Tang Soo Do in 1951. In 1956 he began teaching Tang Soo Do and has been dedicated to the growth of the art ever since. 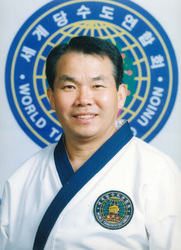 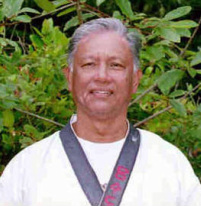 In 1958, Grandmaster Mariano Estioko (Moo Duk Kwan Dan #759) began his Tang Soo Do training at the Osan Air base in Korea while serving in the US Air Force. While stationed there, he saw a group of men practicing martial arts and asked them what they were doing and if he could join in. He was told, “No” and to go away. But what Grandmaster Estioko saw that day intrigued him and he returned day after day and was rebuffed day after day. His effort didn’t go unnoticed as one of the Black Belts noticed that he always came back.

Finally, Grandmaster Estioko was accepted as a student by Master Song Ki Kim (#312). The training was hard and rigorous. This was the old school of instruction, where mistakes were rewarded with a stinging whack from his teacher’s bamboo stick. Mistakes soon became few and far between. After almost a year, Master Kim sent Grandmaster Estioko to the Seoul YMCA to begin his advanced training under Master Sae Joon Oh. Then, in October 1959 when his training there was completed, he was awarded his Black Belt. He was now the second American ever to receive a Tang Soo Do Black Belt after Dale Drouillard (#757).

In the same year, Grandmaster Estioko returned home to Sacramento, CA where in December 1959 he began teaching the art to a select few. He still teaches Tang Soo Do to this day. Because of the growth of his organization, in 1985 he founded the Western Pacific Tang Soo Do Association. At that time his senior Black Belt students honored him by bestowing upon him the recognition and title of Grandmaster of the Association, where he continues to serve as president. Recently, he was also named president of the US chapter of the World Dang Soo Do Union by Grandmaster Song Ki Kim, its founder.