US Goodwill Tang Soo Do Founders

Founded in 2000, the US Goodwill Tang Soo Do Assocation was the vision of Steven J. Voelker and David L. Sgro.  Each had already started their own Tang Soo Do organizations and recognized the need for brotherhood and fellowship between not only their schools but other Tang Soo Do schools who were no longer connected to larger organizations.  Their vision was to create an association of schools that could meet for regional, national and international events to share technique through the spirit of competition, clinics and seminars. 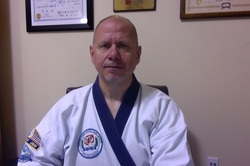 With 40 years in the Martial Arts and a full time Instructor and Studio owner since 1985, Kwan Jang Nim Voelker is a wealth of knowledge.  He Founded Pyong Hwa Kunin Tang Soo Do in 1998 and Co-Founded the United States Goodwill Tang Soo Do Association (USGTSDA) in 2000.  He is on the USA Executive Committee as Vice President of the World Dang Soo Do Union in the USA.